Passenger flow within the enhanced Skukuza terminal building and surrounds

From the outset it was identified that the current Skukuza airport terminal building does not have the space necessary to allow for the separated holding of passengers departing and arriving at the airport, as well as for the security processing of passengers and their bags and subsequent holding within sterile areas.

The design for the enhanced terminal building therefore incorporates a separate ‘node’ within which is located a sterile area where passengers would wait once they have checked in and passed through the security scanners.

Passengers arriving at Skukuza airport would disembark and proceed through the arrivals gate into the restricted meet and greet area. In order to avoid congestion in the main public area a separate node would be provided where only pre‐approved and identity card carry rangers and guides from the lodges and Kruger concessions would be allowed access to meet their arriving guests. Facilities to be able to provide refreshments to these groups have also been provided in this area. It is envisaged that this would be used by members of small groups waiting for others to disembark etc.

Larger groups and FIT travellers would however be directed to bypass this area and proceed directly to the main public area and then through to the entrance vestibule. On the left of the vestibule a decked open area has been provided where larger groups can be held in order for them to be briefed etc by their event or group coordinators. This will also be designated a smoking area.

Simultaneous to passengers disembarking their flights, their baggage would be offloaded and be transported to the arrivals baggage collection facility. 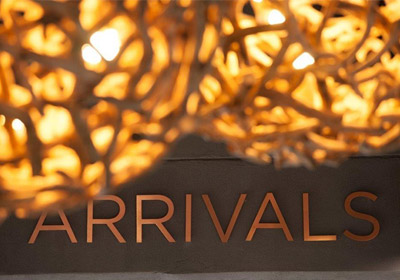 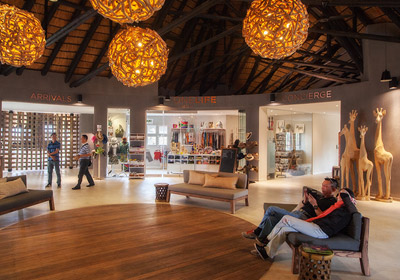 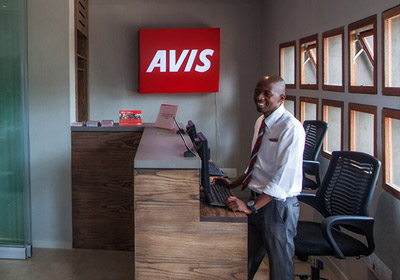 Passengers arriving at the airport would proceed from the car park through the arrival vestibule and move into the main part of the terminal for check‐in. Three counters have been provided, two of which would be in constant use during opening hours by the scheduled airline and the third would cater for feeder flight traffic, charters, and overflow or fast baggage drop for already checked in passengers as necessary. Airlink intends that the bulk of the passengers would already be pre‐checked in at their lodges and their processing at the airport will be expedited. (This was a procedure which Airlink has adopted previously when it operated its Mala Mala scheduled service).

Once checked‐in, passengers would have the option to conduct any last minute shopping in the retail boutique, before proceeding through security scanning into the departure terminal area or node.

Once their flight is called passengers would then proceed through the departure gateway for boarding pass and identity/security confirmation, prior to embarking their flight.

In the case of passengers arriving at Skukuza airport to proceed on lodge feeder flights, they would also pass through the security screening check‐point and then be escorted to their aircraft by airport staff in conjunction with guest relations representative from the shuttle/feeder/charter operator.

Simultaneous to passenger processing, the passenger’s baggage once weighed and tagged would then pass through a scanner into the secure baggage make‐up area located behind the check‐in area. Other than the access to the scanner there will be no access possible to this area from check‐in. All personnel requiring access to this area would have to first pass through the security scanning station. 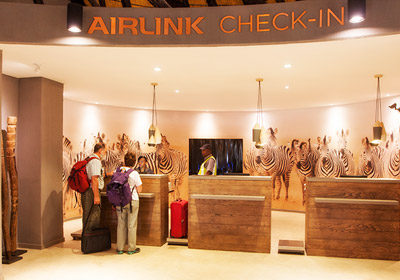 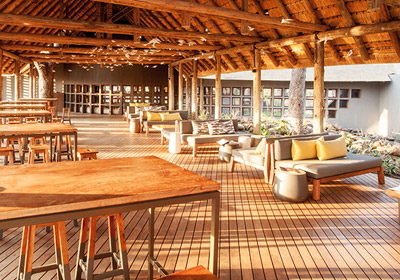 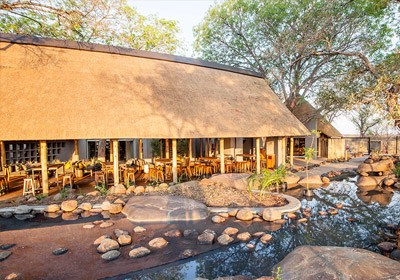 Passengers’ arriving on Airlink’s scheduled flights, proceeding immediately to transfer on a feeder flight to lodges in the North would not enter the meet and greet vestibule but rather stay air‐side. On arrival at the arrivals gate they will be directed to the left of the entrance to the arrivals area into a roofed transfer waiting area. Here passengers would meet their flight or ground crew for their feeder flight and would wait here pending the arrival of their transfer baggage off the Airlink flight. Such bags would have already been tagged to transfer destination when passengers checked in at OR Tambo or CPT airports. Ablution facilities have been provided in this area.

Once the transfer bags have arrived on the apron in front of the transfer area the passengers would be escorted by their crews to their feeder aircraft. This separation and practise is essential to ensuring that passengers do not wander unescorted on the apron area in the midst of multiple aircraft movements etc…

Passengers’ arriving on Airlink’s scheduled flights, proceeding immediately to transfer onto a road transfer would enter the meet and greet vestibule and met by the transfer operator or game ranger. Then collect their baggage off the Airlink flight from the baggage collection area. Ablution facilities have been provided in this area.